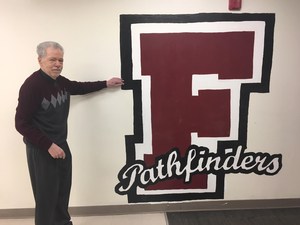 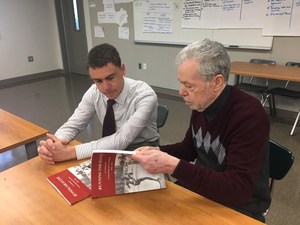 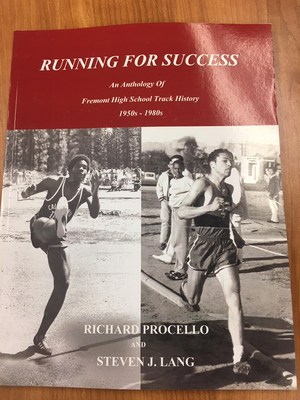 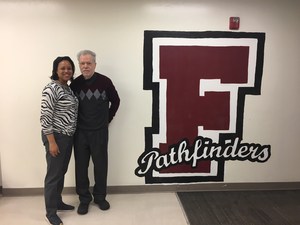 Class of '58 Alum Richard Procello and his daughter Alicia visit Fremont. Mr. Procello spoke about his experience at Fremont and running track. He was a top performer in the one-mile run (4:34.0) in '58. Procello generously awarded a $1,000 scholarship to Fremont. His book, Running for Success: An Anthology of Fremont High School Track History 1950s-1980s is available for reference at the Fremont Library.

Click to read an excerpt from Running for Success by Richard Procello and Steven J. Lang

Richard’s first competitive running experience began at Ritter Avenue Elementary School in Watts at the age of eleven. During his first week, the entire class was told to race to the fence and back to the teacher, about 100 yards total. Richard tied the fastest boy in the school while running in street shoes. His second races occurred at John Muir Junior High School where he was the fastest 7th grader in the school. During his first semester at Fremont he entered the Annual All Comers Two Mile Run and placed 5th. That event was the beginning of his distance running career. Richard ran cross-country for three years. As an incoming 10th grader, he was the fastest runner on the 10th grade squad. In his first duel meet, he was elevated to the varsity team and became third man varsity. The 1955 varsity team placed 2nd in the Los Angeles City High School Cross-Country Championships. The team also ran in the Southern California Cross-Country Championships and placed 6th. The Lettermen’s Club nominated him as one of the best tenth grade athletes.

During his first track season, he ran the 1320-yard run and won a gold medal by placing 1st place in Southern League Finals and was 7th in the Los Angeles City High School Track and Field Championships. The highlight of his track season was the duel meet at Jefferson High School, where Jeff lost its first duel meet at home in over 10 years.

In his second cross-country season, the varsity team won Southern League Finals and took 3rd in the Los Angeles City Cross-Country Championships. Richard won an individual medal by placing 4th in league finals (in a field of 75 competitors) and he placed 6th in the All City Cross Country Championships (in a field of 115 competitors). He was voted captain of the varsity cross-country team.

As a senior, Richard ran the mile and won his preseason meets and four of five duel meets. He placed 2nd in Southern League Finals and was awarded a silver medal. Coach Thayer wrote Richard a note after his retirement in 1993 and said Richard was on of the “great milers in Fremont history.” Procello’s best high school mile time was 4:34..0 He was on of Fremont’s top milers between 1925 and 2007.

Richard said he had two outstanding coaches: Irv Tanner, cross-country; and Bill Thayer, 1320-yard run. Tanner continually tested his limits and encouraged him to run to his maximum capacity. He pushed him to excel. Thayer coached him one on one. Richard had a chemistry class conflict with track and arrived on the field after the workouts were completed. As a result, he had to work out by himself the entire track season. Thayer was very specific about what he wanted him to do and provided immediate feedback. Thayer made him “feel the pan.” Sometimes the workouts were harder than the meet.

Because of his running experiences, Richard formed life long high school friendships, confidence in his abilities and an increased ability to deal with hardship and pain. Due to his training, he became a life-long athlete playing volleyball and tennis, swimming and scuba diving. He now swims and walks the hills in his neighborhood and spends time with his two, athletes-to-be grandsons, Martise, 21 months old and Mason, one month old. Maritse already show great promise. He hit a lightweight softball 30 feet off the tee on May 3, 2009. Richard’s daughter, Alicia, was a track star at St. Bernard High School where she held the 400-meter record, anchored the 4x400 meter relay team that held the school record and ran third leg on the 4x100 relay team, which also held the school record.

Richard received his B.A. and M.S. degrees from California State University, Los Angeles. He was a manager and chief of staff services with the State of California Employment Development Department for 32 years. He is a professional photographer and artist, author of three genealogy books about his family history and a California State Licensed Marriage and Family Therapist.